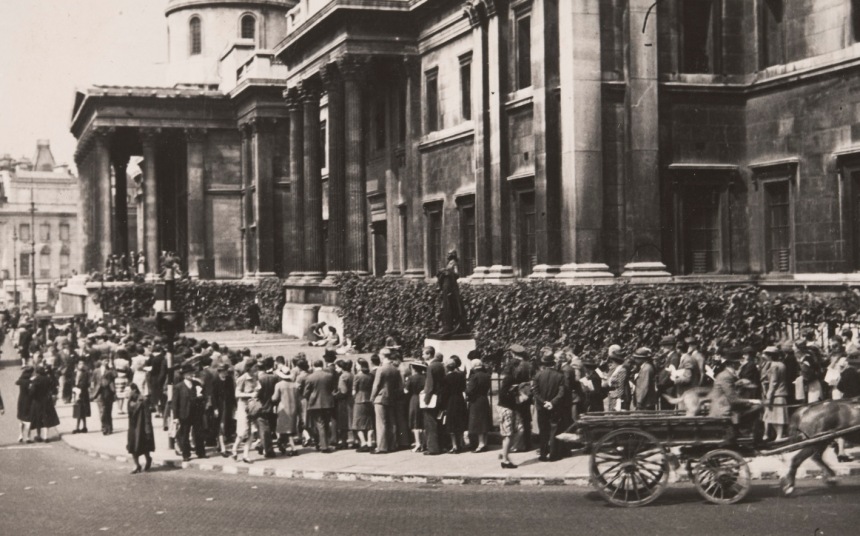 The queue that stretched around Trafalgar Square on Tuesday 10 October 1939 gave Myra Hess and her team the first hint that the concerts were going to be more popular than they expected. The doors of the Gallery were due to open to the public at 12.30pm, half an hour before the first concert was scheduled to begin. At 12.20pm the organisers peeked out, expecting to see a small crowd. Instead, the line stretched down the Gallery steps, along one side of Trafalgar Square and right around the corner.

The opening event had been organised so quickly that there had been little time for advertising and Myra Hess had decided to give the first performance on her own rather than get together a group of musicians, ‘In case the whole thing is a flop.’ She expected 40 or 50 of her friends would turn up to support her; instead she played to an audience of around 1,000, with many more turned away.

‘What sort of people were these who felt more hungry for music than for their lunches?’ asked Clark. ‘All sorts. Young and old, smart and shabby, Tommies in uniform with their tin hats strapped on, old ladies with ear trumpets, musical students, civil servants, office boys, busy public men, all sorts had come.’

‘The moment when she played the opening bars of Beethoven’s Appassionata will always remain for me one of the great experiences of my life,’ Clark said later. ‘It was an assurance that all our sufferings were not in vain.’

At the advent of the Second World War, the National Gallery’s paintings were moved out of the capital to safety. The pianist Myra Hess begged the Gallery’s director, Kenneth Clark, to let her stage concerts in the empty rooms, believing Londoners needed the solace of music then more than ever. He agreed – and The National Gallery’s lunchtime concerts became a staple of war-time London, continuing throughout the Blitz and running for six-and-a-half years.

The National Gallery commissioned an extensive website to tell the story.

Something unprecedented has happened to music in the National Gallery and I am sure it could not be recaptured elsewhere. Music has become part of the daily life of thousands of people.